What is a Continuum of Care?

Components of the Continuum of Care 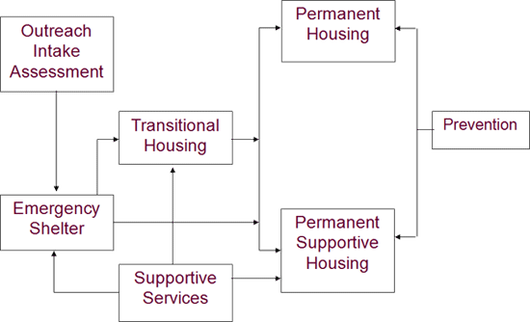 History of KSHC and Balance of State Continuum of Care Membership

In 1999, a small group of people representing State and Federal government agencies and local non-profits met to discuss bringing the issue of homelessness to the forefront statewide.  The group concluded that the best way to increase awareness of homelessness and the many sources needed to alleviate the homeless epidemic was to hold a statewide conference.  The first Kansas Statewide Homeless Summit was held in November 1999 in Salina, KS.  Over 100 people attended and the keynote speaker was Michael Stoops from the National Coalition for the Homeless in Washington, DC.  Over the next year, the group expanded by adding several other homeless service providers from across Kansas to the Coalition and together they planned and held the second Statewide Homeless Summit in Salina, KS in November 2000.

In 2001, a Board of Directors was created and KSHC incorporated as a 501 (c) (3) organization.  The Board of Directors voted to continue the Statewide Homeless Summits but to hold them in different cities each year.  The Statewide Homeless Summits have been the major education and training forum for homeless service providers throughout Kansas.  Traditionally, KSHC has hosted the summits at no charge to participants to help assure that all individuals, regardless of income, can attend.

Two of the founding tenets of KSHC are to (1) serve as an organizing entity for homeless service providers from across Kansas and (2) help end homelessness in Kansas in the next ten years. KSHC brings together a variety of federal, state, county and local agencies, faith-based organizations, and advocates that serve people who are homeless throughout Kansas.  KSHC strives to disseminate information regarding homelessness to community members throughout the state.  In addition, the Coalition advocates for improved housing and support service options at the state and local levels.  KSHC has sought to educate essential local, county and state government employees about the needs of individuals who are at risk of and who are experiencing homelessness.  As an indicator of their success, KSHC has received proclamations from mayors in four major cities and the County Commission of Sedgwick County (the State’s most densely populated county).

In 2003, the Kansas Statewide Homeless Coalition expanded its role and took the lead in coordinating the Balance of State Continuum of Care.  The U.S. Department of Housing and Urban Development requires states and local communities to establish a Continuum of Care (CoC) planning strategy in order to apply for Homeless Assistance Funds.  Kansas has five urban jurisdictions each of which has sophisticated planning groups that have successfully secured several hundreds of thousands of dollars to assist the homeless under the CoC process.   However, 100 rural counties have not participated in the process.  In 2003-2004, KSHC took the lead and developed the planning strategy, coordinated information, garnered support from all 100 counties, reviewed project applications and submitted four applications for funding for the Balance of State Continuum of Care.  The 2004 application was awarded over $2,000,000 in Homeless Assistance Funds for four projects in rural Kansas. Since then, the Balance of State Continuum of Care proposal was awarded funding for three projects.

In July 2004 and 2005, Kansas Housing Resources Corporation and Kansas Department for Aging and Disability Services recognized the contribution KSHC has made in Kansas and awarded funds to hire Balance of State CoC Coordinator.  The CoC Coordinator works with rural communities to develop local task forces/coalitions who will be responsible for developing plans to end homelessness and to participate in the Balance of State CoC planning process.  This position began part-time but later became full-time.  In 2014, KSHC hired a full-time Executive Director and has funds to hire a part-time or full-time Coordinator.

Today, KSHC operates as a 501(c)3 with eleven staff and oversees grant funding as the Collaborative Applicant for the Kansas Balance of State Continuum of Care, the recipient of a HUD Coordinated Entry Project grant, Emergency Solutions Grant Statewide Gap Hotel/Motel, Rapid Rehousing and Homeless Prevention provider and partners with statewide agencies to assure all the resources and efforts needed to end homelessness across the Balance of State of Kansas are available.